No child should have to worry where her next meal will come from or whether she will have a place to sleep each night in the wealthiest nation on earth. Yet more than 12.8 million children in America—about 1 in 5—live in poverty and face these harsh realities every day. More than 2 in 3 poor children are children of color and our youngest children are our poorest. We are failing our children and our nation.

When we let millions of children grow up poor without basic necessities like food, housing and health care, we deny them equal opportunities to succeed in life and rob our nation of their future contributions. Poverty decreases a child’s chances of graduating from high school and increases her chances of becoming a poor adult. It makes her more likely to suffer illnesses and get caught in the criminal justice system. Beyond its human costs, child poverty has huge economic costs. Our nation loses about $700 billion a year due to lost productivity and increased health and crime costs stemming from child poverty.

Child poverty is an urgent and preventable crisis. Solutions to child poverty in our nation already exist if we just expand and invest in them. Benefits like nutrition assistance, housing vouchers and tax credits helped lift nearly 7 million children out of poverty in 2017, but millions of children were left behind due to inadequate funding, eligibility restrictions and low wages. We can and must fix these problems to help more children escape poverty now.

In 2015, the Children’s Defense Fund published our groundbreaking report Ending Child Poverty Now which showed, for the first time, how America could immediately lift millions more children out of poverty by simply improving and investing in policies and programs that work. Four years later, we find it unacceptable and unconscionable that our leaders are still debating and our poor children are still waiting. Millions of children have needlessly suffered in poverty because our nation failed to act. How many more years, child lives and taxpayer dollars will we waste before we end child poverty? How many more studies and reports will it take before our leaders acknowledge that we know what to do and can start right now?

This second edition of Ending Child Poverty Now updates our earlier study and issues another call for an immediate reduction in child poverty. It confirms, once again, our nation can act now to end child poverty for a majority of children and raise family incomes for millions more. By investing an additional 1.4 percent of our federal budget into existing programs and policies, we can cut child poverty at least 57 percent, lift 5.5 million children out of poverty and help 95 percent of all poor children.

Recognizing the urgent need to help more poor and near-poor children today, CDF identified nine policy improvements that could be enacted immediately to increase employment, make work pay and meet children’s basic survival needs for food, housing and child support. CDF then commissioned the Urban Institute to estimate the child poverty impacts and costs of these policy improvements. According to the Urban Institute, these combined policy improvements could substantially reduce child poverty as measured by the Supplemental Poverty Measure (SPM) which accounts for the impact of government benefits and tax policy on families.

Enacted together, these improvements would:

These improvements would cost $52.3 billion—1.4 percent of federal spending and 0.3 percent of U.S. gross domestic product (GDP). This is a bargain our nation—which approved nearly $2 trillion on tax cuts for the wealthiest individuals and corporations in 2017—can easily afford. Every dollar invested in reducing child poverty will return at least seven dollars to our economy.

The bottom line is simple: we must eliminate child poverty and can get started immediately. Children only have one childhood and it is right now. We cannot afford to wait another 3, 5, or 10 years to end child poverty—and this report shows we do not have to. We have the knowledge and resources. We must now develop the moral and political will to act.

Who Are Our Poor Children and How Poor Are They?

Children are the poorest age group in America.

The youngest children are the poorest during critical years of brain development.

Poverty affects all children, but disproportionately children of color.

The majority of poor children live with at least one working family member. 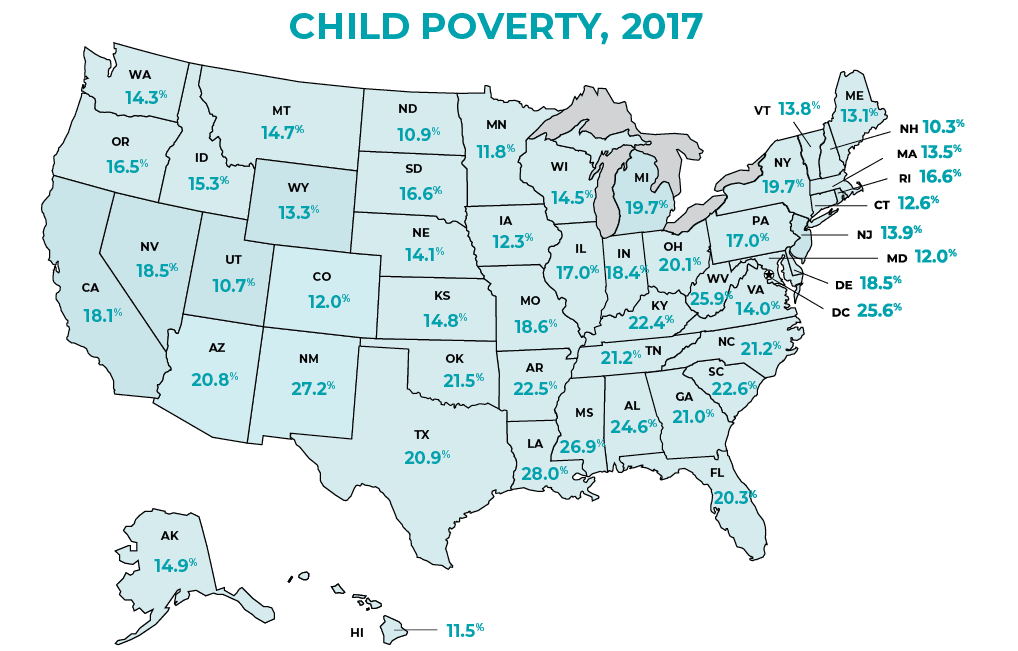 Note: These figures reflect the number of children living below the official poverty line as calculated by the Official Poverty Measure (OPM) based only on cash income.