Many President Trump observers believe he throws out inflammatory and divisive comments to distract in moments when the news cycle is critical of his erratic, inappropriate and contentious conduct. That appeared to be true last week when more than three million suffering Americans without power or enough food and water in hurricane devastated Puerto Rico were desperately crying for more federal help. Senate Republicans were busy introducing another callous health care repeal bill to deny millions of Americans life giving health care to widespread criticism and President Trump was spouting rhetoric which threatened to bring our nation closer to a military confrontation with North Korea’s intemperate leader. As if these crises were not enough distraction, President Trump chose to pick a loud unpresidential fight urging football players who chose to kneel during the national anthem in nonviolent protest be fired. His blatant and sad attempts to pit us against each other as Americans should shame us all.

It did not take long to recognize that the specter of President Trump in Alabama standing before a boisterous, largely White crowd condemning a predominantly Black group of citizens for a peaceful method of nonviolent protest against injustice was chillingly familiar. Rev. Bernice King, Dr. Martin Luther King, Jr.’s daughter, was one of many who immediately pointed out historical parallels. On Twitter she shared photos of civil rights leaders kneeling in protest next to a photo of N.F.L. players Colin Kaepernick and Eric Reid kneeling before a game. 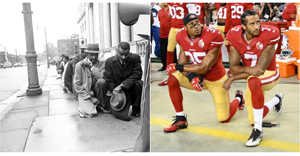 It was former Super Bowl quarterback Kaepernick who made the first quiet, courageous and moving decision of conscience last year to kneel during the national anthem written by a White pro-slavery supporter. He was personally and nonviolently protesting against a string of indefensible police-related killings of Black men and the pervasive racial and social injustices evident all across our nation. Reid and then others joined in the peaceful and prayerful gestures of conscience that triggered President Trump’s vulgar and utterly unpresidential outburst. Along with photos of her father, Bernice King commented: 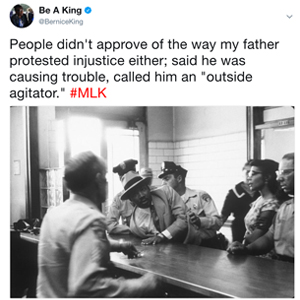 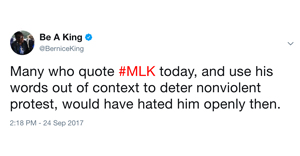 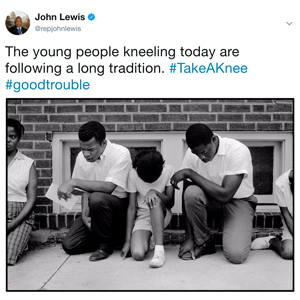 Former Attorney General Eric Holder was among others who shared a photo and message about Dr. King: 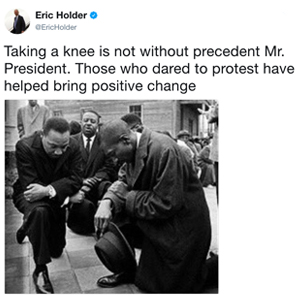 As one of many many hundreds of thousands of people who protested, marched, sat and – yes – knelt and went to jail like Dr. King and John Lewis during the Civil Rights Movement I know this is true. I applaud athletes using their visible public platform to protest racial injustice and carry on a morally courageous legacy so needed today in our nation and world. Americans standing up or kneeling down to insist our nation live up to her founding creed of liberty and justice for all are standing on the shoulders of moral giants throughout America’s history.

Every single movement for equality and justice in America from the Revolution through fights for an end to slavery, women’s rights, gay and lesbian rights and more has faced loud, dangerous, and often violent opposition. There always have been people in power who condemn as un-American any and all forms of protest and any challenge to the nation’s economic, racial, gender and other forms of discrimination however unjust. I urge all of us to engage in what Congressman Lewis calls “good and necessary trouble.”

In a New York Times op-ed – “Why Colin Kaepernick and I Decided to Take a Knee” – Eric Reid said: “It baffles me that our protest is still being misconstrued as disrespectful to the country, flag and military personnel. We chose [the respectful gesture of kneeling] because it’s exactly the opposite. It has always been my understanding that the brave men and women who fought and died for our country did so to ensure that we could live in a fair and free society, which includes the right to speak out in protest. It should go without saying that I love my country and I’m proud to be an American. But, to quote James Baldwin, ‘exactly for this reason, I insist on the right to criticize her perpetually.’”

Dr. King would cheer. He said: “I criticize America because I love her, and because I want to see her stand as the moral example of the world.” I hope all our children will be willing to live their conscience unbridled by political or cultural criticism. Kudos to athletes and others willing to risk careers and endure the ire of haters and shameful role models, including the President of the United States, who stand with White supremacists. All attempts to denigrate, distract and divide us by anyone in high and low places must not and will not prevail. We are better than this in America. True patriots and people of all major faiths must never cease to honor the creed and struggle to close the gaps between creed and deed.

Marian Wright Edelman is President of the Children’s Defense Fund whose Leave No Child Behind® mission is to ensure every child a Healthy Start, a Head Start, a Fair Start, a Safe Start and a Moral Start in life and successful passage to adulthood with the help of caring families and communities. For more information go to staging.childrensdefense.org.