Will 11.9 million Poor Children Get Answers in Tonight’s Debate? 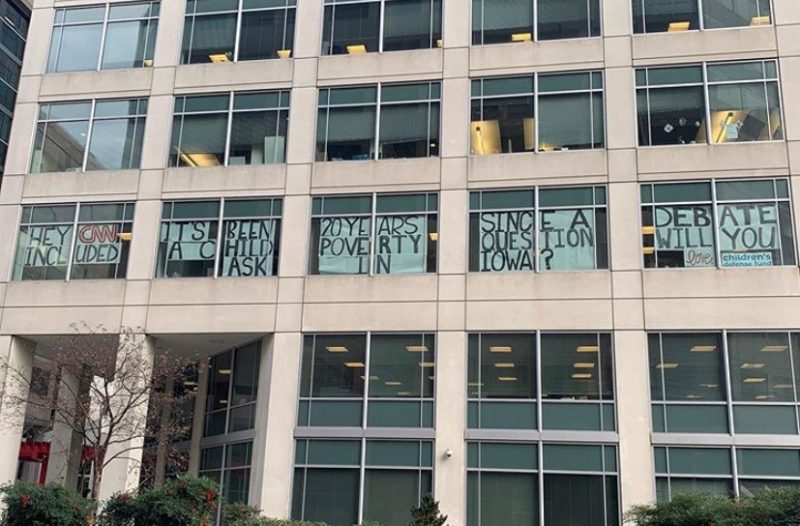 Tonight, six presidential candidates will take the stage and millions of Americans will tune in for the seventh Democratic debate. But will the moderators demand answers for our nation’s 11.9 million poor children?

More than 20 years and 151 presidential debates have passed without a single question on child poverty. Candidates have been asked about the World Series, cursing in movies, and flag lapel pins but not preventable, costly, and immoral child deprivation in the wealthiest nation on earth.

Outraged at continued, callous, and cowardly silence in the face of child suffering, the Children’s Defense Fund, the revived Poor People’s Campaign, and a growing number of Americans have been calling upon networks and candidates to elevate the needs of poor children and families on the debate stage. Last week, we confronted our next door neighbors at CNN with window signs asking tonight’s moderators to address poverty head-on. Our friend Rev. Barber of the Poor People’s Campaign echoed these calls to the debate’s co-hosts at the Des Moines Register. In response, Rekha Basu from the Des Moines Register issued a column and call to action for viewers and moderators alike: we must stop allowing ourselves and our leaders to “get so caught up in the minutiae that [we] lose sight of the big picture, which is that more than 50 years after Martin Luther King Jr. spearheaded the first Poor People’s Campaign, nobody’s really talking about poverty anymore. Candidates talk about protecting the middle class, but only a few address the [needs of poor Americans].”

We will be watching tonight’s debate and hoping that changes—and if not, let’s mobilize and raise a ruckus until it does. When a child is born into poverty every 51 seconds in America, we cannot afford to wait for our leaders to take this crisis seriously.