A Shameful State: Child Poverty Crisis Continues in States Across the Nation

Children across the nation, especially children under six and children of color, live in extreme poverty during critical developmental years

Washington, D.C.– The Children’s Defense Fund analysis of new 2017 state data released by the U.S. Census Bureau shows the child poverty crisis continues across the country. While 16 states experienced significant decreases in child poverty from 2016, children remain the poorest age group in America. More than 1 in 5 children were poor in 16 states and the District of Columbia. Child poverty rates ranged from 10.3 percent in New Hampshire to 28 percent in Louisiana. Half of all poor children in America lived in just seven states – California, Texas, Florida, New York, Georgia, Ohio and Illinois.

“While even a small reduction in the number of poor children is good news, the fact that in 16 states in America, nearly 1 in 5 children in lives in poverty is morally and practically unacceptable,” said Marian Wright Edelman, president of the Children’s Defense Fund. “That our youngest children are the poorest group of children is a shameful indictment of our values and our common sense and how our nation – one of the wealthiest in the world – takes care of our most vulnerable. Our children’s present and future lives are too valuable to let these profoundly unjust practices continue. We must demand that the politicians campaigning for our support this November stand up for children and commit to action to end child poverty now.” 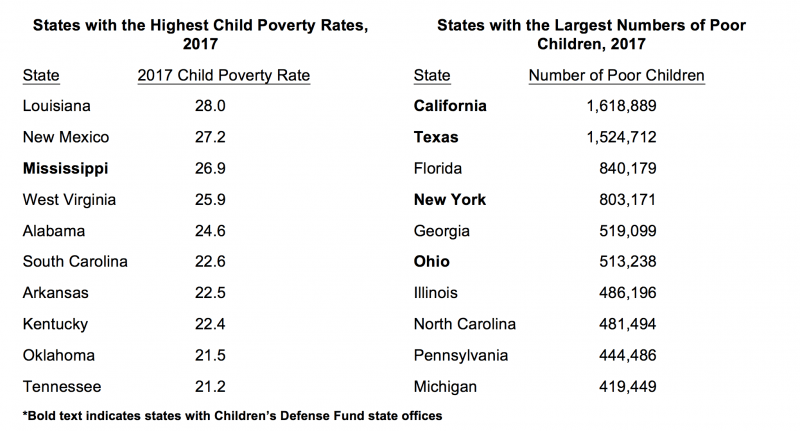 The Children’s Defense Fund believes no child should live in poverty and all children must be afforded the opportunities they need to reach their full potential. Protecting children against the lifelong consequences of poverty will improve their life and reduce child poverty in future generations. We have the resources to end child poverty and now must create the will to do so. We cannot afford to wait. The future of our children—and our nation—depends on it.

The Children’s Defense Fund (CDF) is a 501(c)(3) non-profit child advocacy organization that has worked relentlessly for more than 40 years to ensure a level playing field for all children.

The Children’s Defense Fund Leave No Child Behind® mission is to ensure every child a Healthy Start, a Head Start, a Fair Start, a Safe Start and a Moral Start in life and successful passage to adulthood with the help of caring families and communities.

CDF provides a strong, effective and independent voice for all the children of America who cannot vote, lobby or speak for themselves. We pay particular attention to the needs of poor children, children of color and those with disabilities. CDF educates the nation about the needs of children and encourages preventive investments before they get sick, drop out of school, get into trouble or suffer family breakdown.