Washington, D.C. – For the first time since 2008 when data first started being collected by the U.S. Census Bureau using the American Community Survey, the uninsured rate among children has failed to decrease from the previous year. In 2013, although there was a small decline to 7.1 percent of children uninsured nationwide from 7.2 percent in 2012, it was statistically insignificant. In the five preceding years, from 2008 through 2012, the uninsured rate decreased from 9.3 percent to 7.2 percent.

“We must redouble our efforts to ensure all children have access to quality affordable health coverage,” said Marian Wright Edelman, president of the Children’s Defense Fund. “Between 1997 and 2012 the rate of uninsured children was cut in half, thanks largely to strong coverage guarantees in Medicaid and the Children’s Health Insurance Program (CHIP), which together last year provided comprehensive health and mental health coverage to more than 44 million children.

CHIP now faces a very real threat. If Congress doesn’t take action, there will be no new funding for CHIP this time next year. Millions of children could lose health coverage, and millions more would pay more for less coverage. With a strong bipartisan beginning in 1997, CHIP has been a lifeline for millions of children in working families. Congress must act to extend funding for CHIP this year to ensure children do not lose ground.”

The Children’s Defense Fund Leave No Child Behind® mission is to ensure every child a Healthy Start, a Head Start, a Fair Start, a Safe Start and a Moral Start in life and successful passage to adulthood with the help of caring families and communities. 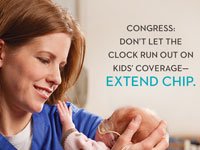 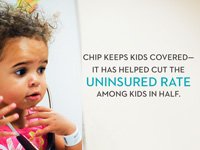