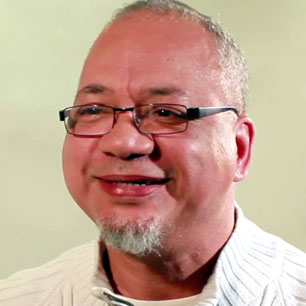 Victor Anderson is the Oberlin Theological School Professor of Ethics and Society at the Divinity School. He is also the Professor in the Program in African American and Diaspora Studies and Religious Studies in the College of Arts and Sciences. He holds degrees from Calvin Theological Seminary including the Master of Divinity and Master of Theology in Philosophical and Moral Theology. He earned the M.A and Ph.D. in Religion from Princeton University in Religion, Ethics, and Politics (1991, 1992). Anderson has published three books: Beyond Ontological Blackness: An Essay in African American Religious and Cultural Criticism (1995), Pragmatic Theology: Negotiating the Intersection of an American Philosophy of Religion and Public Theology (1999), and Creative Exchange: A Constructive Theology of African American Religious Experience (2008). He teaches courses in philosophy of religion, philosophical, theological and social ethics, African American religious studies, and American philosophy and religious thought.