This web page is dedicated to the late, Mrs. Anna M. Hebron. Anna was from Montgomery County Maryland. Anna was a strong supporter over her lifetime of the Children’s Defense Fund due to her passion for protecting children from being abused. Anna’s grandchildren they called her “Nana.” She was a quiet but powerful woman with a gentle smile and a big heart, deeply devoted to the things of God and His people. She had a particular fondness for young people and she always advocated for the “under dogs” or those babies or “voiceless angels,” especially focusing on the protection of children from any abuse, no matter where or how it occurred. 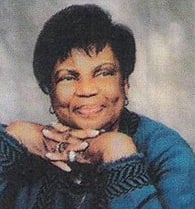 Nana was always living her truth through her life as a model in the good times or bad times, even when living her truth was seen as being too hurtful or raw for many to accept that truth. Anna didn’t believe in trying to polish up her truth to make it politically correct, and certainly never believed in covering up the truth.

Nana supported the Children’s Defense Fund from its beginning in 1973 until her death in September 2017 through contributions. She also took personal action as an advocate and became a CASA worker to advocate for one of her grandson’s in 1987.

Thank you, Nana. Her family requests that you consider supporting the Children’s Defense Fund Memorial with a gift in memory of Mrs. Anna M. Hebron.

In memoriam of Anna Hebron, help all children get the start they deserve.