“MAKE ME A WOMAN”

One of my sheroes is Sojourner Truth. A brilliant but illiterate woman, she was a great orator and powerful presence who possessed great courage and determination. I often wear a pendant with her image and words: “If women want any rights more than they’s got, why don’t they just take them, and not be talking about it.” An unwavering defender of women’s rights and an abolitionist, Sojourner continues to fuel my determination to fight for equality for women, people of color, and children left behind. She was born into and lived nearly three decades in slavery but dedicated her life to combating slavery and gender inequality and second-class citizenship. She never gave up talking about or fighting for justice and equality. 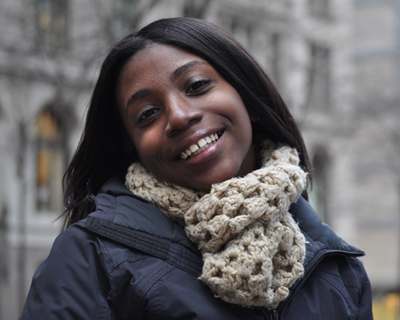 Sarye Huggins is a high school senior who knows her Black history and has also been inspired by Sojourner Truth. Read a few lines from her spoken word poem “Make Me a Woman”: Make me a woman in this world of poverty and deceit. They’ll know I’m a woman by the sounds of determination coming from my feet . . . Just make me a woman.  Don’t you think the time has come? I can hear my ancestors summoning me by the sounds of their drums. A woman, me? Imagine that. Once you grant me this wish, I’m never turning back. She also writes that she knows “strong women run through my blood”—but her journey towards becoming a strong, confident young woman has not been easy.

Sarye lives in Brooklyn, New York’s Bedford-Stuyvesant neighborhood, a community disproportionately plagued by poverty and violence. Her teacher explains, “She’s survived ‘Bed-Stuy, do or die’—that’s the motto of our neighborhood.” Sarye’s mother, a teacher, died from a brain tumor when Sarye was two. Her father was frequently part of her early life, and she was raised by a beloved aunt. As a smart, shy girl attending some of the poorest and roughest schools in New York City Sarye didn’t always feel she fit in. Although she won awards in elementary school for being an outstanding student she also endured a lot of teasing and bullying from her peers and harbored much of the pain inside. In middle school things got worse when her father stopped calling and visiting. For the first time her grades started slipping, causing her to lose her confidence, and she began trying desperately to change herself to gain acceptance by her peers. When the inner turmoil reached a breaking point she started cutting herself and described some of the pain she was feeling in another poem: I didn’t want to be smart anymore. I was no longer myself. I got angry, and placing blades to my skin just did not help. I knew that what I was doing to myself wasn’t a felony, nor was it a crime, but at the same time I didn’t realize that I was just destroying my heart, my soul, my body, and my beautiful mind.

The odds were stacked against Sarye as they are against so many of our Black girls and boys today. Black children are the poorest children in America; every other Black baby is poor and every two minutes a Black baby is born into poverty in our wealthy nation. Black children are less likely to live in two-parent families, are more likely to be abused or neglected or enter foster care, and suffer worse health outcomes than White children. Black students fall behind in school early and do not catch up; more than 80 percent of fourth and eighth grade Black public school students cannot read or compute at grade level, and a Black high school student drops out every 33 seconds during the school year. Black children and youths are at greatest risk of being funneled into the prison pipeline and are at highest risk of gun violence, the leading cause of death among Black children and teens ages 1-19. For many of the children in Sarye’s neighborhood, these odds have already proven too much.

Sarye was blessed by her aunt’s unfailing support and by caring teachers during her freshman year of high school who began nurturing her potential. She says: “They just saw something in me that I didn’t even really see in myself at the moment, and I think that’s what I really needed.” After Sarye attended the Summer Bridge Program at Boys & Girls High School, her English teacher recommended she apply for the Smart Scholars Program, which would allow her to take classes at Long Island University beginning in 10th grade. She surprised herself by testing into college-level English during the entrance exam. Though still in high school, she’s maintained a 4.0 in her college classes while excelling in her high school courses. Unsurprisingly, English has remained one of her strengths—and she’s embraced writing as a way of expressing some of the feelings she struggled to hide inside. From her poem “I’m Free From It”:  “I didn’t have to hide behind the bars of shame, hurt, or declaration. I could build on the things that were given to me and renovate the parts that were taken. My dreams that were deferred had me shaken up, but only to produce a better me in the making . . . I can look in the mirror and smile, embracing all my scars, marks, and imperfections, perfectly imperfect, not stressing to make the perfect impression, not ashamed, scared, nor confused because I am who I am for a reason.”

Sarye is one of five extraordinary high school students the Children’s Defense Fund-New York will honornext week for beating the odds. A scholarship will help ease their way on the path to college. She knows she’s already made great strides and says, “I feel like allowing people to actually help me and to influence me to do better is what saved me.” What a privilege it is to help young people like Sarye become the strong Black women and men they want to be. All of us must change the odds and help all of our Black girls—and boys, and all children—become the strong and contributing adults they want to be and we need them to be as we look at the security of future generations and our nation.

Marian Wright Edelman is President of the Children’s Defense Fund whose Leave No Child Behind® mission is to ensure every child a Healthy Start, a Head Start, a Fair Start, a Safe Start and a Moral Start in life and successful passage to adulthood with the help of caring families and communities. For more information go to staging.childrensdefense.org.