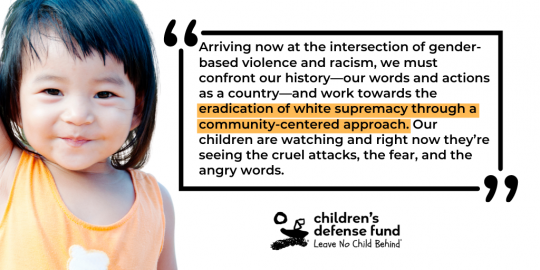 On Tuesday, March 16, eight people were killed at three separate spas in Georgia, six of whom were Asian, seven of whom were women. The facts are still developing, and as we mourn, pray, and protest, we also wish to recognize that this nation’s present surge of anti-Asian violence occurs against the backdrop of systemic racism, xenophobia, misogyny, and exploitation. And we charge each and every person—from the White House to your house—to stand up and promise to do their part to stop AAPI hate and white terrorism.

Fueled by anti-Asian rhetoric from our nation’s leaders, there has been a dramatic spike in anti-Asian hate crimes since the beginning of the pandemic. In less than a year, the organization Stop AAPI Hate has received nearly 4,000 reports of hate incidents, mostly against women and representing only a fraction of the hate incidents that actually occur.

This anti-Asian hate and violence is not new. America has an ugly history of codifying anti-Asian discrimination. Take, for example, the Chinese Exclusion Act of 1882, which banned Chinese immigration to the United States and prohibited Chinese immigrants already here from becoming U.S. citizens. Or how, between 1942 and 1946, the US government forced Japanese American families out of their homes and imprisoned them in concentration camps, only acknowledging the atrocity decades later. And then there’s pervasive housing and job discrimination, and the slurs and misinformation blasted by our nation’s leaders at the start of the COVID-19 pandemic. All little bits of jagged history, paving a broken path to this week’s violence.

We’ve met here on this blog before to talk about how words matter, and how children are listening. We’ve spoken about how children are gifted mimics, and how sometimes they repeat the sharp, angry words and actions of adults. How that means some introspection and course-correction from the grown-ups are in order.

Arriving now at the intersection of gender-based violence and racism, we must confront our history—our words and actions as a country—and work towards the eradication of white supremacy through a community-centered approach. Our children are watching and right now they’re seeing the cruel attacks, the fear, and the angry words.

Our children deserve to feel safe, to have their and their friends’ identities celebrated, and to be protected from hate and discrimination in all forms.