Seven years ago today, twenty first graders walked into Sandy Hook Elementary School but never walked out. Jesse Lewis planned to make gingerbread houses after school but never returned home. Jessica Rakos asked Santa for new cowgirl boots but never had a chance to open them. James Mattioli reminded everybody he was six and three quarters but never reached seven. And many students survived the shooting but never felt safe again.

Parents lost sons and daughters. Children lost playmates and friends. Siblings lost brothers and sisters. And everyone lost their sense of security. After the massacre, a student who survived the shooting told local leaders, “There is nothing you can do or say that will convince me that this will not happen again.”

And, despite parents’ pleas and politicians’ promises, it did happen again. And again. And again. Since the horrific Sandy Hook tragedy, children have witnessed, suffered, or died in over 2,300 mass shootings. And in between, routine everyday gun violence has claimed the lives of tens of thousands of children—on their front porches, playgrounds, streets and sidewalks.

What is it going to take for “Never again” to become more than an empty promise? How many mass shootings must we endure before our leaders act to keep children safe where they live and learn? Have we no shame or sense of responsibility to stop the slaughter of our precious young?

Enough is enough. We should not be watching another anniversary of Sandy Hook pass by without new common sense gun violence prevention measures. All of us must stand up, speak out and organize with urgency and persistence until our leaders treat gun violence as a public health crisis and take steps to save child lives and futures. In memory of the 20 children whose lives were snuffed out at Sandy Hook and the tens of thousands more killed in cities and towns across America, call your elected officials and urge them to protect children, not guns—now. 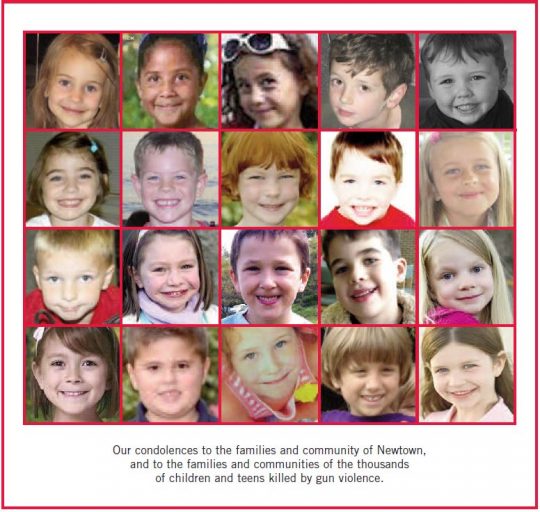